There has been a lot of chatter and rumbling about private investments over the last few years.  Many famed investment managers have touted the performance of private equity and venture capital investing.  The public has grown quite interested in understanding these investments and TV shows like Shark Tank have gained a lot of viewers and notoriety.  Needless to say, this subject matter makes for a perfect TOM discussion.

We are blessed to have our very own, Kenny Molina providing a guest post today and teaching us about all things private investing.  Without further ado, I welcome you to Kenny’s piece titled, Where’s the Nearest … err Biggest Exit?

Today on TOM we are going to discuss the world of venture capital (VC) and private equity (PE) investing.  These types of investments would fall under the taxonomy of “Alternative Investments,” which is often a misunderstood asset class and one worth slowing down to discuss and understand.  VC and PE have gained a lot of popularity in the world of institutional investors like endowments and charities, and their performance track record has piqued the interest of retail investors.  Today we will discuss the basics of what PE/VC investing is, how it works, and who these types of investments may be suitable for.

If you’ve been following markets at all over the last couple of months, you’ve probably heard of WeWork, the ‘office sharing’ company that has been grabbing all of the media’s attention.  WeWork is a private company and had been preparing to ‘IPO’ (Initial Public Offering) or go public as it’s commonly referred to.  This is when a private company begins trading on a public exchange (e.g. Nasdaq, NYSE, etc.), which allows all investors access to buy and sell shares.  It also allows an “exit” for the current private investors, as it creates a marketplace for shares to be easily priced and sold.

So why did this potential IPO gather so much attention?  Well, the company was hoping public investors would be eager to purchase shares at its lofty valuation of $40 billion (yes, that is billion with a “b”), but through a series of miss-steps and embarrassing revelations, it tumbled to a mere fraction of what it was once valued at its peak.  Ultimately withdrawing its intent to offer shares to the public.  This tumbling all happened as analysts and bankers began the due diligence process of understanding the fundamentals of the business and the publics potential interest in owning shares.

Yikes! The WeWork saga paints a gloomy picture for private investing and might make some wonder why one would ever be interested in this type of rollercoaster investing.  Although the WeWork story makes for an interesting anecdote, it definitely does not represent the norm for PE/VC investing.

Let’s take a step back to understand how private investing works.  We are using the term “private investing” as a catch-all to describe both Private Equity and Venture Capital.  Let’s just draw a simple distinction between the two.  Private Equity typically refers to a majority ownership investment in a mature company, while Venture Capital is usually an investor providing “seed” funding to an early-stage company.  Both investing in private companies, but each at different stages and levels of engagement.

As we stated earlier, private investing (PE/VC) is an alternative investment (TOM has previously covered some fundamentals regarding considering alternative assets) where pooled capital from investors is invested directly in private companies (hence ‘private’ in comparison to public equities on a listed exchange). The company’s expectations are similar to that of investing in publicly listed companies in that investors would like to see the companies run well and generate profits for its shareholders, however many of the similarities begin to diverge at this point. Below is a simplified flowchart of a PE fund: 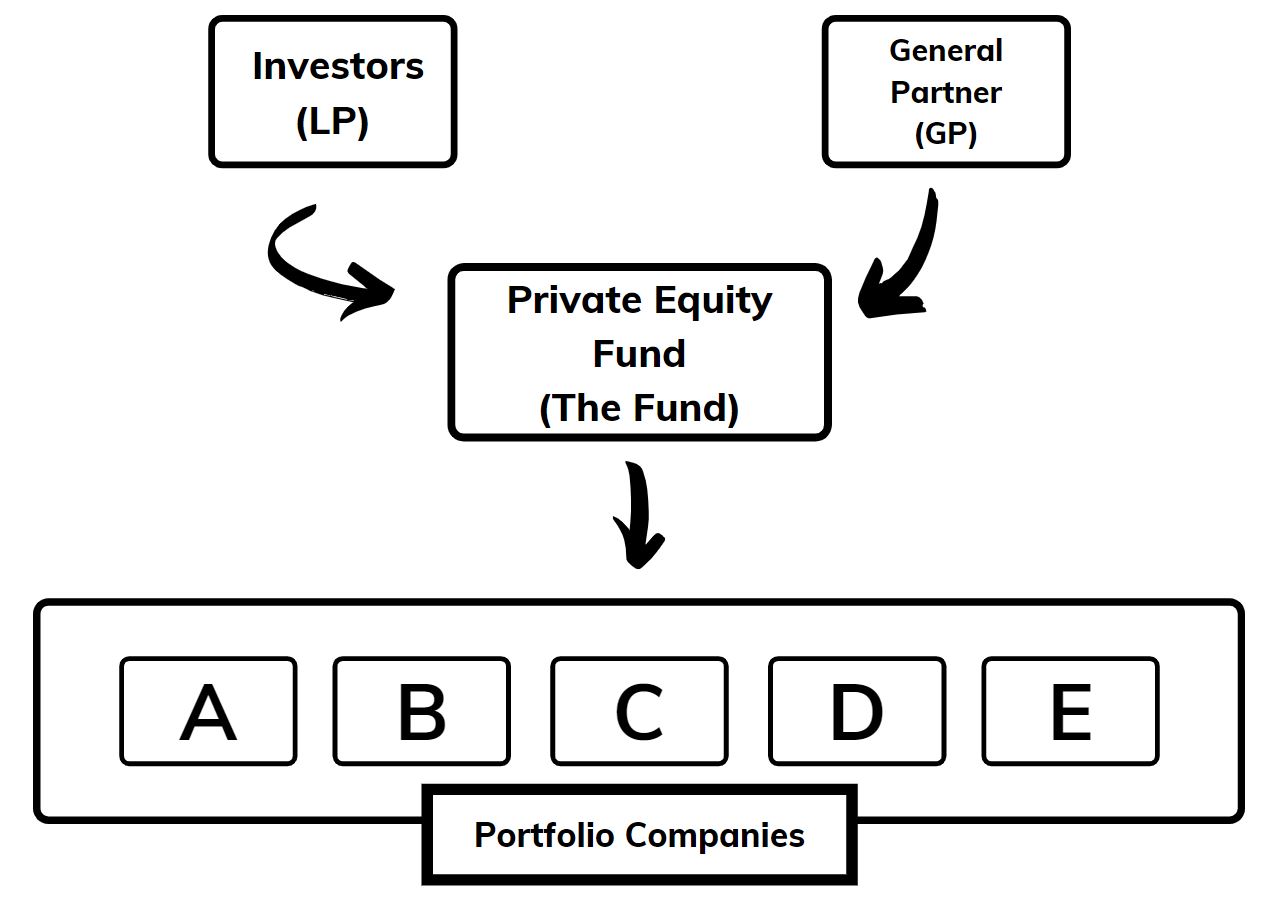 As we can see, contributed capital is managed by the funds General Partners or ‘GPs’ on behalf of the investors (limited partners). Broadly, the General Partners are in charge of identifying the portfolio companies, negotiating favorable terms on behalf of the fund (and thus investors), and depending on the fund’s investment objectives can be involved with management/business turn-around or engaging in value-added mergers/acquisitions. Ultimately a Private Equity fund will realize the majority of its return from ‘winding down’ its investments or commonly termed ‘finding an exit’ for their portfolio companies. This is commonly through accessing public markets, as was attempted in the case of WeWork, or the portfolio companies can be sold off through acquisitions or to another fund.

Venture Capital funds will invest in emerging or early-stage companies where business models may be unproven, and a greater emphasis is placed on the General Partners’ ability to recognize and cultivate talent or opportunity.  This differs from Private Equity funds which generally look for mature companies that can benefit from a management or business overhaul and the General Partners’ ability to bring together the right components to ‘revitalize’ the company. Venture Capital can be thought of as a ‘higher risk, higher reward’ asset with Private Equity being relatively lower returns but (historically) a less volatile return profile.

It is important to be especially aware that as an investor, the life cycle of a private investment can be very different than buying a publicly-traded stock. When buying a publicly-traded stock it is easy to buy and sell shares and gather financial information on the company, right?  For PE/VC investments typically the investment commitment might be 7 or 10 years and the access to financial information will be much more limited.

While liquidity, or lack thereof, is generally a characteristic of alternative investments, private investing is renowned for pushing the limits of an investor’s tolerance. Of course, such an expectation for illiquidity brings about its own expectation reservation from investors in the form of an ‘illiquidity premium’ by which investors expect a certain return profile to compensate for their time. In addition, private investing traditionally experiences what is known in the business universe as a j-curve effect (pictured below). As many business owners or entrepreneurs can attest to, the j-curve is an uneasy time and an interesting phenomenon in a venture’s life. Like a fledgling business, a PE/VC investment can spend the first few years of its life drawing from capital with anticipation of future profits. With life cycles of up to 7+ years, there can be a considerable amount of time of unreciprocated outflows as the General Partners implement the fund’s investment strategy and work towards preparing the portfolio companies for the best possible ‘exits.’

All this seems a little crazy right? It can at times feel hard enough to maintain conviction in a select few hand-picked publicly listed companies! So why and how are some of the natural follow-up questions an investor should consider. Traditionally, like most alternative investments, private investments have produced returns relatively uncorrelated to the public market as the privately held companies are not subject to many public market-specific idiosyncrasies such as quarterly reporting/transparency requirements or broader public-market volatility. PE/VC can be accessed through a variety of different manners from traditional Private Equity Funds, Fund of Funds, or even the listed stocks of Private Equity managers. Like any investment, Private Equity investment opportunities should be thoroughly vetted and understood.  Your investment advisor can help you further understand the PE/VC investing space and decipher whether an allocation would be appropriate in your portfolio.

As always feel free to reach out to Thoughts on Money for more information on private investing or any topic you would like to discuss!